Consciousness and the Biosphere: Frontiers of the Future Colloquium Summary 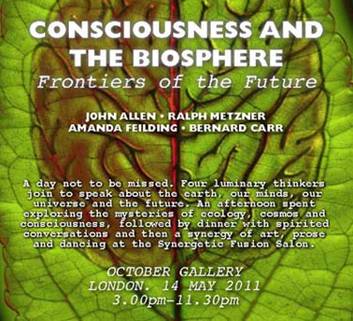 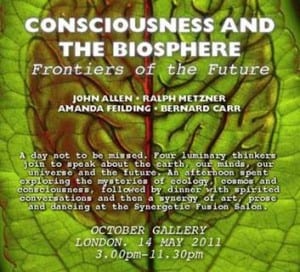 Report on CONSCIOUSNESS AND THE BIOSPHERE: Frontiers of the Future

A Colloquium held at the October Gallery, London, on 14 May 2011

Institute of Ecotechnics, Scientific and Medical Network, and the

What an inspiring afternoon and evening with four illuminated minds. SMN Chairman and expert cosmologist, Bernard Carr, with John Allen, a pioneer in biosphere science and inventor of Biosphere 2; Ralph Metzner, pioneer of consciousness research, cofounder of Green Earth Foundation; and Amanda Feilding, founder and director of the Beckley Foundation, a force for change in the fields of consciousness research and drug-policy.

These four free-thinking explorers of consciousness and the biosphere generously shared their knowledge and vast experience. David Luke, Senior Lecturer in Psychology, University of Greenwich, London, and Director of Ecology, Cosmos and Consciousness Lectures Series moderated the colloquium. The event was recorded and will be available online through Lifeartsmedia.com. Dr. Metzner’s talk is already available.

A brief summary of the talks:

John Allen spoke on Biosphere, Ethnosphere and Emergent Evolution. The inventor of the Biosphere 2 project, this visionary polymath described some basic kinds of reality apprehensions held by humans relating to their biosphere and consciousness. He presented his concept of the human body being thought of as “a cybersphere, a feedback system of molecules, nervous currents, and orientations that can greatly increase or deepen a human’s consciousness of its reciprocal relationship to biosphere by systematically changing its perceptions of itself.” And that the “frontline of evolutionary action on this planet has become the cybersphere; the world of an individual human body.” His passionate and perceptive description of the world we (our bodies) live in under the control of financial capitalism and world markets broke open up our minds to possible new futures.

John is author of many books and papers including his award winning memoir, Me and the Biospheres, and his recently published novel of emergent evolution, Far Out and Far Away, which he read from later at the Synergetic Fusion Salon following the colloquium.

Coauthor of Birth of a Psychedelic Culture with Ram Dass and author of many books, Ralph is a practicing psychotherapist involved in consciousness research for over fifty years, including psychedelics, yoga, meditation, and shamanism. Professor Emeritus at the California Institute of Integral Studies, he is cofounder and president of the Green Earth Foundation, a non-profit educational organization devoted to healing and harmonizing the relationship between humans and the Earth.

Amanda Feilding, scientific director and founder of the Beckley Foundation, dedicated to further understanding of the subject of consciousness and its altered states, spoke on Frontiers of the Mind: Exploring Human Capabilities.  “If we could demonstrate the potential gains that humanity could harvest from the intelligent use of psychoactive compounds and consciousness enhancing practices we could hopefully make the world a happier place with wiser humans to take care of it.”

Founded in 1998, the Beckley Foundation works  in collaboration with leading scientists around the world. It is dedicated to providing a rigorous, independent review of global drugs policy, which aims to reduce the harms associated with both the misuse of drugs and the policies that aim to control them. The Beckley Foundation has been influential in the development of many novel policy initiatives over the last decade.

Our last speaker was Bernard Carr, Professor of Mathematics and Astronomy at Queen Mary, University of London, and Chairman of the Scientific and Medical Network, speaking on Cosmos, Creation and the Culmination of Consciousness. He presented an engaging talk on the evolving view of how we understand the cosmos, and how the emergence of complexity and consciousness sciences and the role of mind and spirituality are coming together, extending science to factor in consciousness. We were riveted to our chairs while revolving in cosmic space.

Bernard Carr’s research includes the early universe, black holes, dark matter and the anthropic principle. He is the author of more than two hundred scientific papers and editor of “Universe or Multiverse?” His interests include psychical research and the relationship between physics and consciousness.

In sum, from David Luke who moderated the colloquium: “We’ve travelled very far in a short period of time: from the biosphere and technosphere to noosphere to the mythosphere to geocentric, to ethnocentric to galactocentric.” The day will be remembered by all who were there. See Lifeartsmedia.com for webcasts of the talks.

The afternoon was chaired by David Luke, Senior Lecturer in Psychology, University of Greenwich, London, and Director of Ecology, Cosmos and Consciousness Lectures Series. The evening portion of the event included dinner with spirited conversation, poetry and dance.

Cosponsored by Synergetic Press, the October Gallery,
Scientific and Medical Network and Earthdance

Special thanks to Gennaro Ambrosino of Lifeartsmedia.com, Martin Redfern from SMN, and Jonathan Greet for documentation of this event.

Videos of the talks are available through Lifeartsmedia.com.
Dr. Metzner’s talk is now online there:

Here is a new link to a summary and video of the Q&A with David Luke for our colloquium in the Lifeartsmedia.com newsletter last week.http://www.lifeartsmedia.com/consciousness-and-the-biosphere-q-and-a?utm_source=Life+Arts+Media&utm_campaign=6078ab95d4-Newsletter_29_January_2012&utm_medium=email