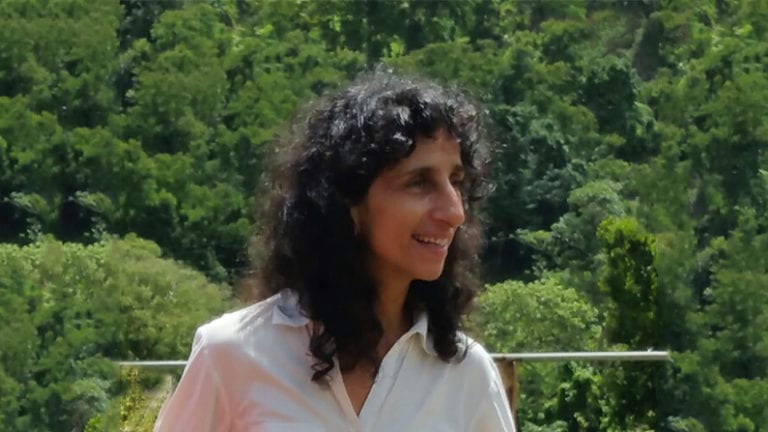 3t has worked with 60 International Earthwatch research teams in the rainforest since 2001, and has been a Principal Investigator in these teams since 2007. 3t’s life in the rainforest has included measuring and monitoring hundreds of trees, planting trees, collecting seedlings, carrying out vine studies, homestead and volunteer management, forest-road maintenance, drainage and erosion control, watershed awareness, and the creation of a sustainable forestry enterprise.

An Associate of the Institute of Ecotechnics since the early nineties, 3t has hands-on and hands-up experience in a range of fields: ecology, event management, arts, adventure, expeditions, and theater.

In the mid 90’s she served nearly three years as an all-round crew member, and as Assistant to the Expedition Chief, diving to study coral reefs in remote parts of the Red Sea & Indian Ocean on the Institute’s Research Vessel Heraclitus, also crossing the Atlantic and Mediterranean Oceans. Coral reefs, the most sensitive ecosystem on the planet are the first to show signs of distress in response to environmental change. Thrity Jal Vakil participated in demanding  scientific dive-studies on vast coral colonies, and swam with giant manta ray and octopus, studying first-hand some of the most diverse and beautiful marine environments in the world.

Thrity Jal Vakil was born of Zoroastrian parents in Nairobi, Kenya, East Africa, and moved to Wimbledon, London, at the age of ten.

From Wimbledon to Nottingham, 3t graduated in 3-Dimensional Theater Design. Apprenticing with master scenic artist Mary Coxon for two years, she participated in West End and Music shows all over England, Scotland, and Ireland.  She spent a decade as a scenic artist working on huge canvas backdrops in studios and theaters with paint-frames, all over the UK, and in London at Elms Lesters Painting Rooms in Soho, and The Theater Royal, Drury Lane. Painting for large-scale musical theater productions in London venues, and for UK tours, she also created fringe theater productions in the UK.

In the late 80’s and early 90’s, 3t became a dynamic vector in the boundary-pushing UK shamanic dance/rave scene. In the role of ambient architect, she helped organize Warehouse Parties in the north of England. In London she became a player in the Megatripolis scene, and with the “Zippy Pronoia Tour To US, 1994”, took a road expedition across the US from New York to San Diego with 12 co-inspirators. They organized ‘raves’, interacting with Paolo Soleri, Allen Ginsberg, Ken Kesey and the Merry Pranksters, Johnny Dolphin, The Biospherians, Terence McKenna, Wired magazine, John Perry Barlow, RU Sirius, Dee-Lite, Lady Miss Kier, and Goa Gil, along the way.

Between 1999 and 2004, she alternated with life in the rainforest and life in the high desert of Santa Fe, New Mexico, at Synergia Ranch, Center for Innovation. She co-managed a 500-tree organic fruit orchard, from tree care and pest management, to marketing and fruit sales, and contributed to all areas of ranch-life, working with The Institute of Ecotechnics, the Biosphere 2 Archive, the Global Ecotechnics Corporation, the Theater of All Possibilities, and Synergetic Press, an award-winning independent publisher.

Since 2000, 3t has lived in the wet, steep, forested mountains of the island of Puerto Rico.

Painter and digital artist: The Artwork of 3T Vakil